As every big, populous metropolitan area, Warsaw is divided into boroughs (or districts) which in turn are divided into neighborhoods – each of them has its own history (sometimes dated back to the medieval times) and many of them are identified by some characteristic landmark or main purpose they serve in the city’s life – some are industrial, some are used as so-called bedrooms etc. If you plan to visit the capital, a basic knowledge of its neighborhoods is advised. If you are planning an extended stay in Warsaw, it is literally necessary to know where to go and know where you are, as it is easy to get lost in the numerous and very unique districts of the city.

We should start our series with the borough that will probably be the first (and most likely – the last when you leave) location every visitor puts a foot on. 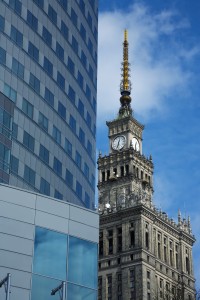 The heart of the city, where most of the skyscrapers, business centers and governmental buildings (including the Stock Exchange, Warsaw’s University Main Campus and the Presidential Palace) are located. Finding a place to stay here might be tricky without previous booking, as all city centre hotels and apartments for rent are a very valuable assets in Downtown. Every major public transport stops here, including international trains. The Downtown is also directly connected to the Chopin’s airport through the dedicated  train and bus line.

Śródmieście is also the historical and cultural heart of the city and it is the location of the Old Town (as the name implies – the oldest part of the city, established in XII century), surrounded by the remains of the defensive walls, with the old Royal Palace in the center. You’ve probably seen it on the numerous photos of Warsaw and yes – it is certainly worth a stroll or two through the narrow streets of a medieval town (especially when there are many renown restaurants serving traditional food there).

Most of the architecture you will witness in Śródmieście might seem a bit schizophrenic, as you can find various styles in here – from neo-gothic and renaissance churches, through classicist government buildings, finishing with the concrete monuments of socialism (with the famous Palace of Culture and Science standing in the literal center of the city)  and modern glass skyscrapers, all in one, pretty small space. It’s all due to the difficult and tragic history of the country and the city, devastated countless times through the centuries (hence the unofficial name – the Phoenix City) and razed to the ground during World War II. After the Warsaw Uprising, 85% of Warsaw was turned to dust – including the Old Town, which had to be rebuilt from the ground up – and that’s why today Warsaw doesn’t have one distinct style of architecture or one clear border between the Old and the New like Paris has with its modern La Defense or Prague has with its unmistakable, medieval city center. 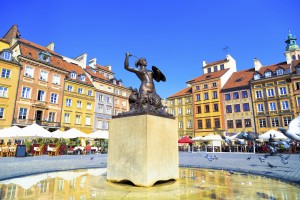 Nevertheless – if you wish to feel the atmosphere and experience history of Warsaw in a short period of time, Downtown is your best bet, as you can see most of the important landmarks, stroll through beautiful parks and visit some of the most famous attractions without leaving the district. But, if you have a chance and a little bit more time to spare, it’s worth to see other boroughs, which I will describe in the next articles of this series.